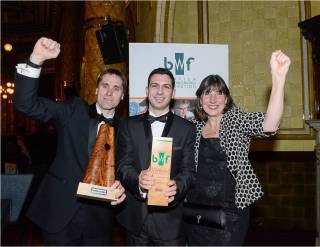 The UK joinery industry’s highest awards were announced at the annual dinner of the British Woodworking Federation (BWF) in London last Friday.

Oakwrights Bath Ltd of Corsham, Wiltshire scooped both awards for technical excellence and innovation in joinery manufacture, and for the apprentice/trainee of the year – the first time that one company has won both awards together. The achievement was particularly notable given that this year the BWF received a record number of award entries in both categories.

The BWF’s 2013 award for technical excellence and innovation in joinery manufacture was given to Oakwrights for its transformation of a building in central London into a spiritual centre for the Self-Realization Fellowship.

The main technical challenge came from turning the vision of the Fellowship, the architect, Ray Hole Architects, and the client, Healthcare Development Services Ltd, into reality through two project phases over the course of 18 months. The vision was to undertake a refurbishment that would preserve the heritage of the building while enhancing the whole building decoratively. This involved transforming windows, doors and other internal features, and ensuring the modern 1970s extension linked to and echoed the original Victorian part of the building.

Very high levels of technical ability were needed on every part of the project and the manufacture of the joinery was achieved within a short period to allow other trades to complete their work in time for the opening ceremony. It was all managed despite problems of limited space and poor physical access on site.

“We enjoyed this project because it allowed us to use every skillset we have. The BWF award is a great honour and testament to the whole team at Oakwrights for the way they rose to the challenge of our biggest single project to date. We worked under huge time pressure and it needed the combined skills of everyone to mix the modern and traditional practices required by this job. It was full of very fine working, all bespoke shaped work, ogee arch details and curves on curves!  We have learned a great deal throughout the project, including how to quickly interpret what the client wants and how best to liaise very closely with all parties, tying in with other trades.”

“This prestigious project used modern methods, products and materials to achieve a traditional-looking result, very fine workmanship and excellent standard of finish.  The judges were very impressed with the joinery quality, innovation and fantastic project management skills shown by Oakwrights.”

The BWF technical award was established four years ago as a tribute to John Hedgecock, its former technical director and one of the leading authorities on woodworking and joinery manufacture who died in 2009.  The award is given to individuals, companies, projects or products which demonstrate exceptional technical excellence, achievement or innovation in joinery manufacture.

Two other companies were also shortlisted for the BWF technical award: Houghtons of York for its beautiful hand carving of the Diana, Princess of Wales coat of arms at the Worshipful Company of Merchant Taylors, and J3 Projects Ltd for a stunning railway station waiting room and platform shelter at Northern Rail’s Oxford Road station in Manchester.

The second BWF award of the night, for the apprentice/trainee of the year, went to Luke Parry, a 26-year old estimator at Oakwrights Bath Ltd.

After leaving school, Luke started two courses at Aston University, but found the academic route was not for him.  He went on to complete a Level 3 bench joinery apprenticeship, but was not sure what he wanted to do next.  His college tutor recommended him for an estimating post at Oakwrights Bath Ltd, and Luke applied for the job. This role would give him the intellectual challenge and opportunity to learn that he relishes.

Now in his seventh year of study since starting as an apprentice, Luke is currently working towards an HNC in construction at Swindon College, sponsored by his employer.

Luke worked on the Self-Realization Fellowship project, and loved the demands it involved. Having moved from the workshop into the office at Oakwrights, he is now focusing on the pricing and financial management aspects of the business.

Luke collected the award trophy from John Carter of CITB, which sponsored this year’s award.

“Many young people do not realise that fantastic careers can be built in joinery, and in construction generally. There are so many more avenues to pursue than there appear to be at first glance. With the experience I’m gaining I feel that the future is really open to me, and I have many options and certainly equal opportunities compared to my friends who did go on to get degrees. Do what you really enjoy and there is always a rewarding career at the end of it.”

Peter Love, Luke’s boss, explained that it was obvious from the beginning that Luke had a strong future in the joinery industry. He urges the industry to recruit more people like Luke, saying:

“I do believe that in the past the joinery industry has focussed on the hands’ on skills and crafts required for manufacture. In order to run a successful modern company we also need to move with the times and train up office and management staff who can drive the business forward.”

“Times have changed.  Of course we need the good craftsmen and women who manufacture the quality product that we pride our business on, but we also need ambitious and educated recruits who can build sophisticated relationships with clients and architects. They can learn professional and management skills at an earlier stage in their careers and I believe this will transform the industry of the future.”

The other shortlisted candidates were Michaella Mason, an outstanding female apprentice with “motivation and a strong work ethic”  at Boyland Joinery Ltd, and management trainee Darius Krzywiecki at West Port Timber Windows and Doors who has already achieved the apprentice of the year prize at his college and finished as runner-up in the hotly contested Skill Build competition.

The other sponsors of the BWF’s annual dinner were Euro Joinery & Doors, Accoya and Cheshire Mouldings.