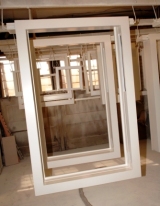 In this section we look at various technical aspects relating to windows that architects, specifiers, other parties and indeed manufacturers should be aware of.

All Buildings in the UK are required to comply with Builiding Regulations.  In the case of windows this means that installations need to be approved through the Building Control process or signed off by a company/individual registered with a relevant competent person scheme (e.g. FENSA).  Thermal aspects of the Building Regulations (Part L in England) has tended to grab alot of the headlines recently with a focus on a move towards zero carbon homes and lower energy bills, however, the announcement of the New Part Q Security Regulation has particular significance for timber windows, where a wider scope of product tends to be available than in rival materials.  Some further detail on this is provided with a short summary of the key areas of the Building Regulations that impact on windows.

Windows may need to provide alternative means of escape from buildings and may need to be fire rated if they are near a property boundary or on an escape route.

Windows may be required to provide a specified level of sound attenuation.

To maintain indoor air quality windows may need to provide “purge” ventilation and are often required to accommodate background (trickle) ventilators as part of the specified ventilation system for a building.

Provisions to enable use by all people

To allow a window to be operated by all people within a building there may need to be consideration given to the type of openers and controls to ensure they are accessible and simple to use.

When people are likely to come into contact with glazing it will need to be protected by a barrier or be robust so as not to break or, if it breaks, it should break safely.

Where low level glazing is at a change of level it may be required to act as a safety barrier.

Safety in the use of windows

Consideration will need to be given to the safe operation of windows, i.e. they should not open on to walkways, and to safe methods for cleaning windows.

The new Part Q of the building regulations for England will introduce the requirement for security-rated doors and windows to be provided for new build homes. The changes, as proposed in the new Approved Document Q, came into force for properties registered after 1st October 2015 in England.  Sites registered prior to October 2015 will only be required to comply with the corresponding regulation at the time of registration.

The introduction of Part Q Security Regulations marks the biggest change to the Building Regulations in recent times and the impact on those supplying product into new homes is huge – any range of windows and non-bespoke external doors (including flat entrances) sold into the new build market will need to be backed by security testing.

Evidence may be cascaded for example, from an ironmongery manufacturer, however, it is vital to ensure that the scope covers the product you are supplying (e.g. section sizes, glazing method/system, species, placement of ironmongery and length and size of any fixings used).  A detailed presentation on Part Q was provided at our Members Day 2015 and there have been regular articles in our newsletter, it has been the hot topic in technical meetings and we have run dedicated webinars.

Included in the accompanying guidance is a proposed Appendix that describes a bespoke timber doorset that would be “deemed to satisfy” Requirement Q1. BWF have spoken to DCLG and Secured by Design and set about producing an Appendix for Windows that would be equivalent to the existing appendix for doorsets. Note that this appendix is still in draft form and is restricted by the test evidence available and could be extended should supporting test evidence be volunteered to support it.   This Appendix does not supercede any test evidence you may have and we also recommend that you talk to your ironmongery manufacturers directly about any evidence that they may be able to make available to their customers in support of the products that they supply.  If you are keen to start testing your product, don’t hesitate to contact the BWF team and we can talk you through the requirements, but also talk to your suppliers to see what evidence they may be able to share with you and can be cascaded to suit your products.

A copy of the Appendix is provided for members who can log in and access it here: https://bwf.org.uk/publications/windows. Further information is available on the BWF website. Should you have any questions or comments, please do not hesitate to call the BWF technical team on 0844 209 2614

A number of British and European Standards cover the design, manufacture and testing of windows for usage in the UK.  These may be referred to in the Building Regulations Guidance Documents or referred to in specification by the project designer/architect.  A summary is provided below.  The BWF Helpline is able to give guidance associated with the application of these standards and you may also purchase BSI standards at a discount via the BWF.

BS 6375-1:2009
Performance of windows and doors. Classification for weathertightness and guidance on selection and specification.

BS 6375-2:2009
Performance of windows and doors. Classification for operation and strength characteristics and guidance on selection and specification.

BS 6375-3:2009
Performance of windows and doors. Classification for additional performance characteristics and guidance on selection and specification.

BS EN 14609:2004
Windows. Determination of the resistance to static torsion.

BS 8213-1:2004
Windows doors and rooflights. Design for safety in use and during cleaning of windows, including door-height windows and roof windows. Code of practice.

BS 8213-4:2007
Windows, doors and rooflights. Code of practice for the survey and installation of windows and external doorsets.

BWF is unable to provide copies of these standards, however, discounts to buy through BSI are available and we hold copies and can answer questions that members may have.

Product testing is a means of assessing a particular product for its ability to achieve specific requirements. These requirements are set out in British Standards, their European equivalents or PAS (Publicly Available Specifications). For detailed guidance on testing of windows and doors click here.  Certification typically involves type testing, auditing or process and audit testing at agreed intervals.  It provides additional reassurance to clients and manufacturers and is often a requirement of specification.  There are a number of certification schemes open to manufacturers of timber windows.  BWF works closely with BSI who run the Timber Window Accreditation Scheme, to find out more click here.

Companies who are certificated are eligible to join the Wood Window Alliance – UK Manufacturers may also meet this standard through accreditation.

Care of Timber Windows on site
Timber windows produced by Members of the British Woodworking Federation are accurate components designed and manufactured using the best available techniques to produce performance rated components. The way they are handled and stored on site can affect their long-term performance. Good practice avoids damage, maintains quality and saves money.

Emergency Egress (escape) windows
In July 2000 the Approved Document B (Fire safety) introduced a new concept of Emergency Egress windows to dwellings with an upper floor level of not more than 4.5m.

Pressure washing and timber windows
After build completion, there is often dirt on the exteriors of the installed timber windows that needs to be removed. If pressure washers are used, the water and dirt can produce a highly abrasive mixture that can damage the paintwork, glass, hardware and seals